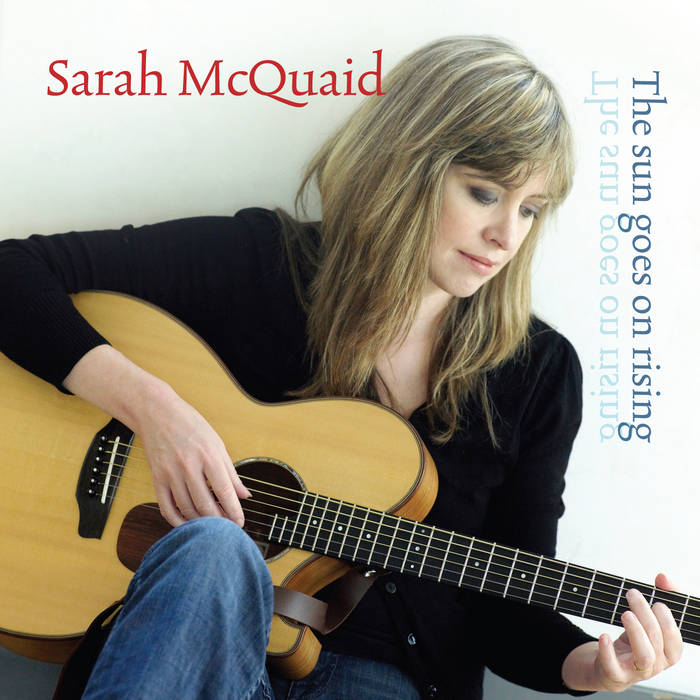 Tracks 1 & 2 are from the forthcoming album The Plum Tree and the Rose. Track 3 is a bonus available as download only with this single.

The Sun Goes On Rising is the first single from The Plum Tree and the Rose, the forthcoming third album by Sarah McQuaid, featuring two tracks from the album plus a bonus guitar instrumental.

Sarah McQuaid is a gifted and captivating performer whose warm, haunting alto is delicately cradled by her “sparkling guitar” (Sing Out!). She is both song crafter and song collector, equally at home with traditional Irish and Appalachian folk songs, Elizabethan ballads and 1930s jazz numbers.

Her musical output is a direct and unfolding reflection of her own eclectic background: Sarah was born in Spain, raised in Chicago, holds dual US and Irish citizenship, and currently lives in rural England. While the genre, era and geographical location of her songs may change, at their core is a musician who has soaked it all in – and, luckily for us, is able to eloquently express the stories she’s gathered.

A folk album is not complete without comment on our current socio-political climate, and Sarah does excellent justice to the global economic downturn on “The Sun Goes on Rising,” co-written with Gerry O’Beirne (Midnight Well, Patrick Street, Sharon Shannon Band), who produced The Plum Tree and the Rose as well as its two predecessors. As percussionist Liam Bradley’s shuffling snare sets a tone of relentless perseverance, the fear of debt and poverty is embodied in the proverbial lurking “wolf at the door” – but, as the chorus points out, there’s hope for the patient.

Up next is Sarah’s cover of “Solid Air,” the late John Martyn’s tribute to Nick Drake, delivered here as a soulful duet with Bill Blackmore on trumpet.

The single’s final track is a bonus download-only release, not included on the album, of “The Duke of Somersette's Dompe,” a 16th century lute piece that Sarah (author of The Irish DADGAD Guitar Book) has arranged for DADGAD-tuned guitar. The Dolmetsch Music Dictionary defines the “dump” or “dompe” as “a sixteenth- and seventeenth-century slow, melancholy old English dance form usually in 4/4 time, ... the title’s meaning possibly that mentioned in Ralph Roister Doister, the comedy written by Nicholas Udall (1504-1556), namely a melancholy induced by love.”

The Plum Tree and the Rose represents a departure from Sarah’s previous albums, which focused on her arrangements of traditional material, in that nine of its thirteen tracks are originals. Although a thread of personal experience is woven into the material, Sarah truly shines as a teller of parables. Whether she’s recounting the life of 16th century businesswoman Bess of Hardwick or standing in a cathedral and pondering the immortality of the soul, the specific detail subtly manifests a universal truth. These are songs that linger in the listener’s imagination.

Sitting surprisingly comfortably alongside the self-penned numbers and the “Solid Air” cover are “S’Anc Fuy Belha Ni Prezada,” a 13th century “alba” or dawn song sung in Old Occitan, a sparse arrangement of Elizabethan composer John Dowland’s “Can She Excuse My Wrongs,” and “New Oysters New,” a three-part canon published in 1609 by Thomas Ravenscroft, featuring guest vocalists Niamh Parsons and Tom Barry. The album is due for release on March 5th.