The Plum Tree and The Rose 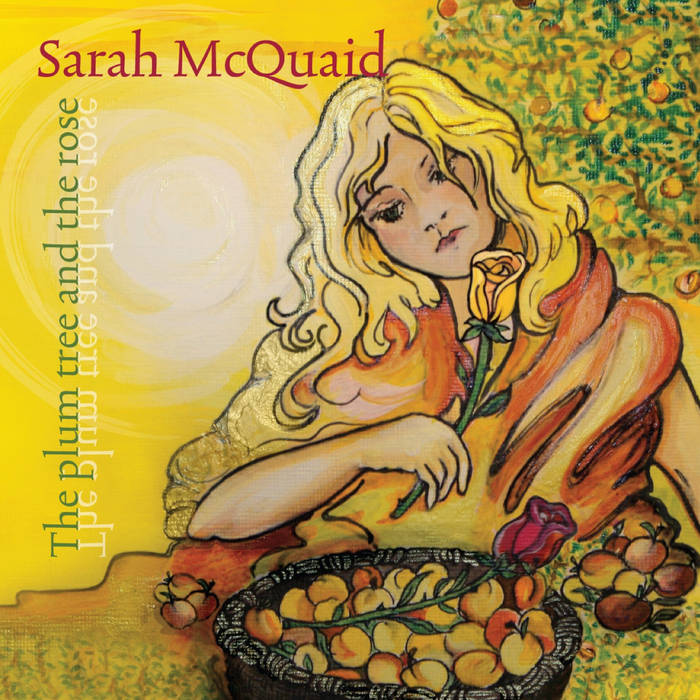 The Plum Tree and the Rose is the third album by Sarah McQuaid, a gifted and captivating performer whose warm, haunting alto is delicately cradled by her “sparkling guitar” (Sing Out!). She is both song crafter and song collector, equally at home with traditional Irish and Appalachian folk songs, Elizabethan ballads and 1930s jazz numbers.

Her musical output is a direct and unfolding reflection of her own eclectic background: Sarah was born in Spain, raised in Chicago, holds dual US and Irish citizenship, and currently lives in rural England. While the genre, era and geographical location of her songs may change, at their core is a musician who has soaked it all in – and, luckily for us, is able to eloquently express the stories she’s gathered.

Produced by Gerry O’Beirne (Midnight Well, Patrick Street, Sharon Shannon Band), engineered by Trevor Hutchinson (Waterboys, Lúnasa) and released on the Chicago-based Waterbug Records label, The Plum Tree and the Rose opens with “Lift You Up and Let You Fly,” one of nine originals on this thirteen-song album. Warm strains from Bill Blackmore’s flugelhorn envelop a tender love letter from mother to daughter. Up next is “Hardwick’s Lofty Towers,” Sarah’s ode to the remarkable woman who in 1590 built the magnificent Hardwick Hall near Chesterfield, Derbyshire.

“Hardwick’s Lofty Towers” introduces a set of sister themes – spiritual questioning and the relationship between soul and place – that inspired a trio of originals dedicated to this topic: title track “The Plum Tree and the Rose” (track 12), “In Derby Cathedral” (track 5) and “Kenilworth” (track 4). “Living in the UK, I’m constantly struck by the powerful imprint made on the landscape here by thousands of years of human habitation,” Sarah explains. “And I think we all wonder at times about the big questions – why are we here, where are we going, does any part of us remain after we’ve gone. I’ve tried to address that in these songs.”

A folk album is not complete without comment on our current socio-political climate, and Sarah does excellent justice to the global economic downturn on “The Sun Goes on Rising” (co-written with producer Gerry O’Beirne). As percussionist Liam Bradley’s shuffling snare sets a tone of relentless perseverance, the fear of debt and poverty is embodied in the proverbial lurking “wolf at the door” – but, as the chorus points out, there’s hope for the patient. Also co-authored with O’Beirne are “So Much Rain,” a rumination on lost love and the changing of seasons, with Sarah’s plangent guitar and string-like vocal harmonies embellished by gossamer piano backing from Rod McVey, and “What Are We Going To Do,” an old-fashioned ‘first kiss’ song in the Golden Age style of Rodgers & Hart, George Gershwin and Cole Porter.

Sarah’s cover of “Solid Air,” the late John Martyn’s tribute to Nick Drake, is delivered here as a soulful duet, this time with Bill Blackmore on trumpet; other surprises include “S’Anc Fuy Belha Ni Prezada,” a 13th century “alba” or dawn song sung in Old Occitan, a sparse arrangement for voice and DADGAD-tuned guitar of Elizabethan composer John Dowland’s “Can She Excuse My Wrongs,” and “New Oysters New,” a three-part canon published in 1609 by Thomas Ravenscroft, featuring guest vocalists Niamh Parsons and Tom Barry. The album closes with Sarah’s original six-part canon of Thanksgiving, “In Gratitude I Sing.”